Last September, Dancing Gabe Langlois was the subject of a biography, Dancing Gabe: One Step At A Time. Little did he know how busy he would be over the next ten months—heck, the guy already attends almost 200 professional sports games a year—and where this adventure would take him.

We now know the next chapter! Fans will be able to get their hands on a Dancing Gabe Bobblehead! Wednesday night, July 13th, 2016, is Hometown Heroes Night at Shaw Park and the Winnipeg Goldeyes Baseball Club pays tribute to Winnipeg’s Police, Fire & EMS Service personnel. They “also pay tribute to Winnipeg’s own “Hometown Hero” Gabriel Langlois with a Dancin’ Gabe Bobblehead giveaway.” 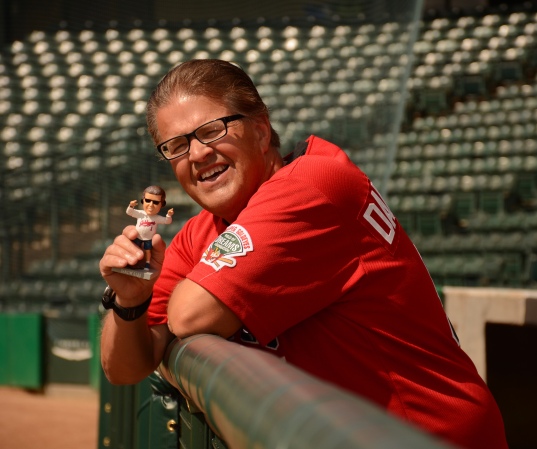 In October, Gabriel Langlois was awarded Winnipeg’s Community Service Award by Mayor Brian Bowman. In November, he led the Grey Cup Parade as the co-Grand Marshall. In January, he was awarded the Dallis Beck Good Guy Award by the Manitoba Sportswriters  and Sportscasters Association. In March, Gabe and his siblings performed the ceremonial puck drop at centre ice on Autism Awareness Night, for a Manitoba Moose game at the MTS Centre. And in April, Dancing Gabe was interviewed on Hockey Night in Canada.

Sprinkled throughout these events, Gabe graciously accompanied me to more than 60 events, signing books, posing for photos, reading to school kids, and spreading joy and happiness to everyone he met. He continues to do this without hesitation, always sporting this big smile everyone loves.

Dancing Gabe has been recognized with many awards and special events over the past 53 years, including a Queen’s Diamond Jubilee Medal in 2010, but you’ll have to read the book to find out more…

I’m honoured, excited, and a little intimidated to participate in the Millennium Library Local Author Fair. I look forward to meeting other authors, sharing our writing stories, and learning from their experiences.
Readers are the focus of the afternoon, and I will be in fine company: Winnipeg’s one and only Super-fan, Dancing Gabe, will be there with me to sell and sign copies of Dancing Gabe: One Step At A Time.
See you there!

Well, thanks to Rogers Hometown Hockey and Ron MacLean, and to Sportsnet Hockey Night in Canada and Scott Oake, and to all Dancing Gabe fans out there, Dancing Gabe: One Step At A Time is back on McNally Robinson’s Bestsellers list for the week of March 27th – April 6th.
Thank you! 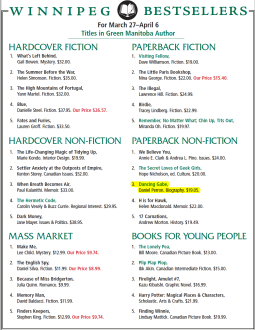 Angelina Langlois passed away ten days ago. She was Dancing Gabe’s mother, and Mike’s, Rick’s, Rob’s, Gerry’s, and Claudette’s. She loved all her children, and her late husband Louis, and devoted her life to their happiness.
I only met Angélina in July 2014 but I soon developed a deep affection and respect for her. She was a wonderful woman: warm, patient, kind, selfless, humble, loving, and with an unshakeable faith. I soon realized how much she was the rock of her family; how she loved all her children, and how they loved her back.
I always looked forward to our conversations at her kitchen table, as I researched to write Gabe’s biography, a story where she featured so prominently. We laughed often, we cried at times (never for long), as my questions took her back in time, revisiting what has been a full and rewarding life, even if it has not always been an easy one. I loved her sense of humour and the ease with which she laughed. Her smile warmed my heart.
Angelina touched my life in so many ways and made me a better person. I know she had that effect on many others…

We were wrapping up our I Love To Read event with the Grade 3 – 6 students. One of the young students raised his hand, eager to ask one more question. His eyes lit up when I noticed him, approached with a few steps to ensure I would hear his query, and invited him to ask his question.

“How many Dancing Gabe books are there in the whole wide world?” he said.

I returned to the microphone and repeated the young man’s question to ensure everyone else assembled in the school’s gym would hear it. A gentle hush had fallen on the students who were even more attentive than they had been during the previous forty-five minutes.

“Well,” I said, “that is a very good question. There are more than four thousand Dancing Gabe books in the whole world today.” My answer, much to my surprise, was greeted with a collection of cheers, screams, and applause from all those assembled. They liked my answer.

Buy Dancing Gabe: One Step At A Time on Kindle.

Dancing Gabe during a Goldeyes game.

Dancing Gabe during a Jets game.

I wanted to recognize the support we received from Scotiabank for Dancing Gabe: One Step At A Time. With permission, I am posting the text from an email I sent to Scott Bollman, Winnipeg District Banking Manager.

Hello Scott,
Happy New Year to you and yours!

I wanted to send a short note of thanks to you for your initiative and enthusiastic support of the Dancing Gabe: One Step At A Time project. Scotiabank was unique in its approach and definitely most effective. Your branches sold a total of 305 books and participated in the sales of a total of 966 books. Effectively, your support generated $6.00 of donations for each of these books, totalling $5,796.00 shared equally among the Jets True North Foundation, the Goldeyes Field of Dreams Foundation, and the Blue Bombers commitment to anti-bullying initiative for young people in Manitoba. This is simply amazing and speaks volume about your people, your organization, and their commitment to the community.

I want to highlight Susan Robert’s contribution to the project and her leadership throughout these four special months. As well, my special thanks and appreciation go to Trish Moeller for her tireless efforts, enthusiasm, and dedication—she made a huge difference! And to Pennee Kroeker for keeping track of all the numbers and helping out at the book release party.

It has been my distinct pleasure to meet the members of your team and to work side by side with everyone along the way, whether at book signing events or during my interactions with the various branches. Please accept my thanks and my gratitude. And to think that all this started from a simple coincidence encounter, on a 6:00am morning walk in July… AMAZING! (You’ll have to ask Susan about this one.)

Well, how about that!
Dancing Gabe: One Step At A Time at #6 of the McNally Robinson’s Bestsellers List of 2015 for Manitoba Non-fiction books.
We’re very proud and honoured to be in the company of such great books and authors.
Thank you Dancing Gabe fans for putting us there!
Thank you Dancing Gabe for your truly inspiring and touching story.
We couldn’t have done it without you.

Dancing Gabe: One Step At A Time now available on Kindle!

Proud to say that the streak continues for Dancing Gabe: One Step At A Time!
Five straight weeks on McNally Robinson Booksellers Bestsellers list (Paperback Non-Fiction) for a total of 11 weeks over the past 16. Pretty good.
Thank you Dancing Gabe fans for keeping us there. Will you keep our streak going until the New Year? Only one week to go…
Happy Holidays!

A huge THANK YOU to the Happy Bookers Book Club–Rose, Karen, Wanda, Laura, Kathy, and Thelma–who read and reviewed Dancing Gabe: One Step At A Time, and invited me to join them for last week’s get together. What a wonderful way to spend an evening with a great group of kind, thoughtful, and witty ladies!

I didn’t know what to expect—I must admit I was a little intimidated at first—but I sure enjoyed the chance to meet everyone, to answer excellent questions, and to discuss so many facets of my experience writing Dancing Gabe: One Step At A Time. In many ways, the questions they asked forced me to reflect, deeply at times, on my motivation and how this endeavour has touched me. The time I spent with the Happy Bookers adds another memorable page to this great adventure.

I hope I didn’t ramble on too much; I definitely found myself getting caught up in the excitement of the moment. You made me feel very special. It was a pleasure to meet you.
Happy reading!