Soon the wheels turn again
Splattering puddles and scattering stones
Not like those pebbles on Agawa Beach
That your feet pushed into the cool sand
Sounding like an army on the march
Their thousand heels clicking on pavement
Keeping time with the invisible drum
That beat which keeps you going
Onward, as always

A half-smile, a half-hearted laugh
It feels so good to lie down
Listening to nature out there
Your breath keeping time
Only for a few seconds
Without thinking of it
Sleep comes almost instantly

When I reach the bridge
The sight is surreal, déjà-vu
Rushing River runs by, waves
The rapids’ music, rocks
Autumn leaves in the wind, shivers

Tiny droplets condense on my lenses
Memories flood my mind
Sounds and sights so familiar
I stare, searching, misty

An photo essay on vertical growth, stacking them up as high as we can…

Waikiki and its surroundings (Royal Hawaiian Hotel in pink).

Waikiki and its surroundings (Royal Hawaiian Hotel in pink).

Modern architecture. Shapes, geometry, symmetry, colours, lines of the city: a photographer’s candy store… From far and up close, we never lack for something to look at, to compose, to photograph. But soon enough it all starts to look the same, and losing sight of the forest for the trees becomes inevitable. The wide angle lens is never wide enough. Density and vertical expansion create vertigo. Noise, traffic, crowds moving at a dizzying pace; who has time to slow down? Who even knows to stop, take a breath, look around? We’re too busy.

Thankfully, a little distance provides a welcome relief from the constant din, from the incessant assault on the senses, numbing really. But to stack them up we must, to fit more and more of us in that same sought-after space. Growth is inevitable and must be embraced. Faster, faster, we go… Slower, slower, we get… but where?

Nature, beauty, solitude are my refuge. Where sounds and sights abound, senses are filled, yet where I can find a place just for me. Just to be… To discover… Thankful. Undisturbed. Quiet. Even just for a moment.

The stars are still visible in the lightening sky when I set off for a hike. Passed the floating bridge, I step off the trail into the wild prairie tall grass, shiny with giant drops of dew, and venture closer to the water. The white puffs my breath creates mirror the fog rising from the surface of the lake. The air is still. A bird chirps in the distance. A beaver slaps its tail in the water and swims off, only a few feet from me. A lonely merganser emerges from the fog, drifting. Deepening golden hues announce the imminent sunrise and the clouds shuffle over for a better view. A log—one half on land, the other submerged—provides the only seat I need for this show, just for me…

The sun has climbed high by the time I wake from my hypnotic trance, dazed, awed, enchanted, filled with joy, happy. The camper awakes to the smell of freshly brewed coffee and a smile. Morning. Unstacked. Life is good.

I hesitate to breathe
Conscious of the privilege
My breath only sound to disturb the calm
How flawless this spectacle
That will never repeat
Unique, bathed in light
A thousand actors and walk-ons
Playing their parts without concern
Aware only of the moment

What time is that exactly?
Dawn. Morning. Really early.
Your eyes deceive your mind,
Excite your imagination, awake your fears.

Stars twinkle in the western sky
Unaware of the oncoming wave.
Night will soon be a distant memory
Revealing the scenery, painting a new canvas,
Irradiating the landscape, warming the air.
Sun and shadows, collaborating artists
Exposing nature (life) once again.

I slept peacefully when
The rhythmic sound of the waves
Drew me to the shore, barely awake
To spy on the lake and the sky.
Why not call it “Nightbreak?”

There always has to be a first, to everything. Camping is no different. The first camping trip of the year, even if only for one night within an hour of home, qualifies. Last week, with technical difficulties (I will spare you the details), I made my way to Creekside Campground, a few kilometres east of Portage la Prairie, Manitoba. Camping at Creekside was not a first; I camped there back in 1983 when it was called Norquay Beach Provincial Campground… and I still remember how cold the water was. I stayed out of the water this time.

Camping in May is usually a most enjoyable experience: no bugs, blossoms fill the air with their fragrances, nature awakes, plenty of birds to see. The perfume from the blooming Alberta dwarf lilacs in my backyard fill my senses as I write this post. 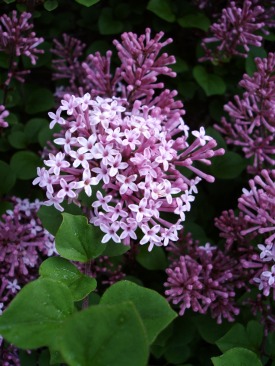 Despite a few thundershowers, I was able to take long walks around the park and explore the trails. Creekside did not disappoint. In fact, quite to the contrary, I was pleasantly surprised with all I saw. Orioles sang away, perched on a branch. An elusive rose-breasted grosbeak saluted me with its loud, melodious, and complex whistling—a beautiful song. Other smaller treetop dwelling birds teased me with their shrill tweet-tweet, fleeting but never to sit still long enough for a photograph. I glanced at a yellow warbler and snapped only a quick shot before he was off. The list goes on: red-winged blackbird, robin, grackle, purple martin and tree swallow, raven, Swainson’s thrush, chickadee, gray kingbird, sparrow… 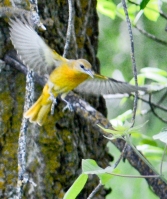 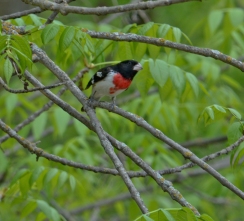 The beach proved to be a sought-after location for sandpipers, plovers, killdeer, ducks, and Canada geese. Mind where you step on the sand! Killdeers warned the wandering trekker with their loud shrieks and their frenzied scurrying. Nests dotted the beach where tufts of grass grew. I spotted a great egret across the creek, its white reflection on the greenish water surface a sure giveaway. Eventually it flew away, seeking more tranquil waters. Around the bend, a great blue heron sent my heart racing—maybe my approaching footsteps sent its heart racing too—as it took off from the reeds, revealing an impressive wingspan of gray and indigo, dangling two long legs.

A great blue heron spreads its wings and flies away

Other than the gentleman who greeted me on arrival, I only met two others: I’ll call them the campground crew. They approached on their John Deere Gator as I strolled with my camera hanging from my neck. First impressions being of the utmost importance, they each sported a broad grin, genuinely happy to stop and say hi. Although definitely of a certain age, these were not two grumpy old men. The driver told me of the large painted turtle population, in a thick down-under accent, and then tried to scare me with a story of sixty year old snapping turtles “This big!” up along the creek. His partner in the right seat nodded with the same broad smile, as if to say “He’s not kidding, you know.” I knew. I never made it far enough to encounter the elder snapping turtle, but I never doubted for a moment that it lurked there, somewhere around the bend… My morning walk supported the crew’s claim concerning the painted turtles. I had only seen a couple the previous day, my noisy footsteps sending the majority plopping into the pond’s murky waters. This time, I tiptoed off the gravel onto the grass, eager to sneak up on whatever might be waiting for me. The sun’s warmth had beckoned an entire lot, warming themselves on the logs strewn creekside. It seems they were only too happy to pose. I stared in amazement at their numbers; the old men had spoken the truth. Here were more than twenty painted turtles, looking like a bad traffic jam, heads to tails (bumper to bumper), on the two or three logs that lay half-submerged only a few feet from the shore. What a sight. I sat in the grass and watched with great curiosity and wonder; the turtles I think observed me more with indifference. 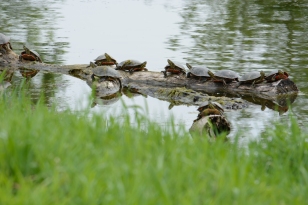 Painted turtles basking in the sun

The rain began to fall softly just after I had packed up, just in time to make my way up the road toward the gate. I slowed as I neared the turtle rendez-vous; the logs were empty. Maybe turtles don’t like the rain… But Canada geese don’t mind it. A pair of geese watched their eager brood paddle along, raindrops rolling off their downy coat. I pulled the camera from my bag which sat on the passenger seat and snapped a few shots through the open passenger window.

A most enjoyable 24-hour camping trip, which only made me long for the next one.