After finishing the manuscript, I was busy dealing with the book’s layout and its technical and visual details, and all the pictures. Especially this one photograph, which bugged me; I could do better. I knew it every time I set eyes on it. That passage in the manuscript, in his life, deserved better.

On the black and white version, the tracks disappear in the west, under this rickety bridge, toward a pale horizon. The darkened windows of the train station make it look abandoned. In colour, the endless roofline with its dormers overlooking windows and doors that look like wide eyes, each with its white eyelid.

A motorbike ride to Portage la Prairie, to snap a better picture, seemed most appropriate on this beautiful summer day, the second longest of the year. I called my buddy Greg and asked him to join me.

At the agreed-upon time, as always, we ride. Greg follows me. I have only rarely convinced him to lead. A long dance begins. We have followed this road a hundred times; familiar but always a stranger. Everything seems new… every time.

One curve follows another along the Assiniboine River that we seldom see through the trees. We imagine it. We feel it, nearby. Farmers’ fields greet us. Thousands of yellow flowers mix to the deep greens as far as the eye can see. The sun almost touches the horizon as the sky takes on pastel hues of orange, pink, yellow, mauve, purple and gray. Shadows stretch out. What a show!

An odour of fresh tar rises from the road and sticks to our nostrils long after we reach the end of the new pavement.

The distinct aroma of cultivated soil, of freshly cut hay, and the smell of the river float in the prairie air. We could smell lilacs only a few weeks before. We will have to endure another winter before smelling them again. And winter lasts an eternity here. Just kidding. It only lasts seven months.

We make it to Portage la Prairie and the CN train station in less than an hour. I signal Greg and stop on the shoulder close to the railway crossing. I pull out my camera from its bag and walk toward the tracks. I stop, emotional. Tears fill my eyes. I visit this exact spot for the first time yet I know it well.

Gabriel, the main character of my book, walked on this very spot many years ago, as a little boy, autistic, frightened, lost. At seven years old, he followed the snow-covered railway on the way to Winnipeg, the only place he ever called “home” but where he no longer lived. His group had returned to the institution without noticing Gabriel was not on the bus, after a visit to the train station. A stranger found him six hours later, a pure coincidence, six kilometers from here. He would not have made it through the night. Of all the pages of his life, these left the deepest mark on me…

Two tracks stretch to the east and meet on the horizon. Where the train’s wheels rub, the steel rail is blue, reflecting the endless prairie sky; the rest is nothing but rust. I cannot make out the railroad ties among the oil-soaked stones twenty meters away. Prairie grass masks this scar with difficulty.

To the west, the rails are silvery, dazzling with light, liquid; somewhat like mercury.

Once my photoshoot completed, Greg and I straddle our rides and cover the short distance to the train station. I tell him why we are here. He understands, instantly.

The bells start ringing at the nearby crossing. The barrier descends. We can see the train’s bright headlights: two eyes and a nose. Via Rail Canada No. 6451 rolls in the station.

“The Transcontinental, destination: Vancouver. All aboaaaaaard!”

The train does not stop here. Its four dome cars remind me of a trip I took with my parents and my sister when I, too, was seven years old. As the train speeds up, the sun’s rays reflect on the shiny sides, blinding me. The train moves away and eventually disappears, but its rumbling continues.

Once our mission accomplished, we fill up, stop for a quick coffee, and head for home. The sun almost touches the horizon. Sooner than I had expected. It will be dark before we reach Winnipeg. Let’s go.

We follow the Trans-Canada Highway this time. The windy country road we took earlier loses itself to the north. At one hundred and ten kilometers an hour, mosquitoes and other bugs rush toward my headlight and splatter on my visor and my windshield. We’re flying.

A strange feeling takes hold of me as sunset slowly gives way to darkness. Fear. Foreboding. I feel as if I strayed too far on the lake and soon I will lose sight of the shore. We pass cars, trucks, and buses. Greg’s headlights, still visible in my rear-view mirror, reassure me. This seems like a race against the clock, against the sun, against darkness, against life.

A few kilometers before Winnipeg, I adjust my goggles and raise my mosquito-blotched visor. I activate my turn signal, letting Greg know that I will leave the highway and take the quieter country road that will take us home. The curtain was about to rise on another show, very brief this time. I would not see it, yet I would be its principal protagonist. As for Greg, he would occupy a front-row seat.

We had barely covered a kilometer on this new road when, in a curve, everything became purely a matter of instinct.

An invisible force grips my handlebars, shakes them violently, and throws me to the ground. Still holding the handles, I slide on the pavement, flat on my back, as my motorbike bounces on my leg. I let go the handles and continue my slide. During what seemed like an eternity, I was somewhere else, above all this. Time, still. I slide in the dark, to infinity, without ever stopping.

But I did stop. Suddenly, I open my eyes; the faint light of dusk gave way to an inky darkness and a thousand stars twinkle in this country sky. The strange feeling has vanished.

Motionless. Lying on my back, all seemed surprisingly peaceful: my boots in the water, my ass in the mud and my head in the grass. Time to perform a quick inventory check: my head unhurt—thanks to my helmet—a scratched elbow, and pain in my left knee where the Magna’s gas tank had bounced twice. I look back toward the road and see Greg’s Harley lying on its side, headlight shining and hazards flashing. He is running. He has seen the whole thing!

Fearing the worst, what elation Greg felt when he saw me sitting, alive.

I reassure him. I stand. He returns to his bike, picks it up off the road, rests it on its kickstand, and returns. A few passers-by stop to inquire about my condition. “Lucky!” they say. Two policemen approach quickly. I am already up.

“Everything is fine, officer.”

A deer had jumped out of the ditch, its head and shoulder contacting my windshield. The deer cart-wheeled above me and landed in the middle of the road. Dead. As I was sliding a few meters away, my bike, once I let it go, got back on its two wheels and continued down through the ditch and up the other side. My slide ended another twenty meters further, in the ditch.

Greg got on my bike, started it, and with a little help made it out of the ditch onto a nearby driveway. I gave it a quick once-over, taking stock of the damage as I pulled the bulrushes and the mud from the frame. Cracked windshield, dented gas tank, twisted brake pedal. Much to my astonishment, my camera, which was stored in its bag on the sissy bar, had made it through the whole thing, unscathed.

After some deliberation, we agree to continue our ride home, carefully, me on my bike and Greg on his. I push the starter’s red button as I had done an hour before; the rumbling of the engine soothes me. Despite the scratches, my helmet seems functional, as do my gloves and boots. No so for my shredded jacket. Before climbing on, I let the motor warm up and make my way to the deer, which I see in all its beauty for the first time. Its eyes sparkle and its big black nose shines.

I notice the deer hair sticking from a crack at the bottom of the windshield: a kind of trophy. Let’s go home. 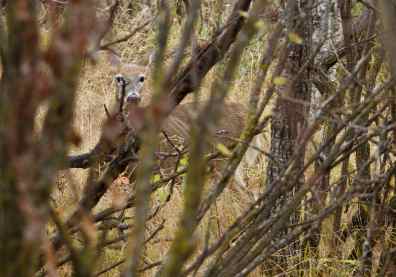